EA had their conference and it turned out to be pretty good although without much surprises. Star Wars Battlefront II

May the 4th Be With You!

If you're a fan of Star Wars and a fan of PC games then today is your lucky day! To celebrate May 4th, AKA national Star Wars day, Steam is offering huge discounts on their Star Wars games

Swtor Logo Electronic Arts had plenty to boast about during their preliminary financial results report for the first quarter of 2011. Since Battlefield 3 pre-order sales are up 10% over it's predecessor. The company was bolstered by top performing games like Portal 2, Crysis 2, FIFA 11, and Tiger Woods PGA Tour 12. What may have come as a big surprise for investors was news that Star Wars: The Old Republic broke the already high record set by Battlefield 3 for pre-orders. Within the first 24 hours of pre-orders going live, the $150 Collector's Edition sold out at EA's own store, Origin 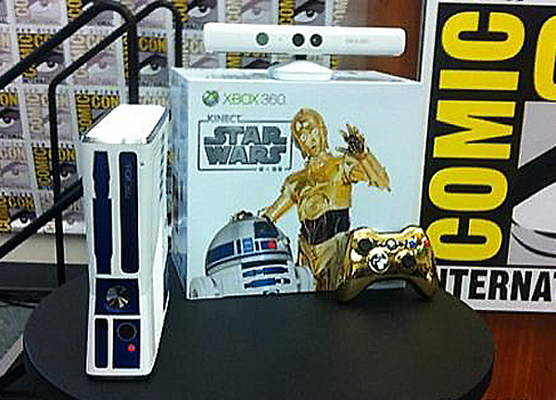 To pay homage to Star Wars Microsoft will be bundling R2D2 with Kinect! Well not the actually R2D2 (wish it was the actual though), a Xbox 360 modeled after the little robot that could. The console will have R2's sounds and look, along with a white version of the Kinect, Star Wars Kinect, Kinect Adventures, and a 320 gig hard drive. Also what would R2 be without his side kick C3P0? The controller that comes with the bundle will be modeled after the worry wart of a robot, can you say bling bling? The bundle will be on sale in the fall but pre-orders should be expected to start today. Pre-orders for the bundle will be priced at $449, force powers and light saber not included. The next gen Starwars title featuring Dark Vadars secret apprentice is now at the low low price of $9.98 at amazon.com. Now this is amazon's deal of the day promotion so it'll be gone today. What's more interesting is that downloadable content for the game just released online for the same price. Have yourself a new experience for $20.00?, act now