Need for Speed is one of the main stays of racing games, the franchise has dominated the genre since it first appeared years ago and hasn't backed down since. Now with much more competition in the market the series looks to continue delivering excellent racing experience. Shift looks pretty amazing so far, the graphics are sleek and polished, while running at a smooth frame rate. The game definitely seems to emphasize the driver view as seen in the trailer. The game is also said to have a whole slew of customization capabilities, giving players the freedom to trick out their rides as they please. Check out the video and gallery to see more.

The first Battlefield Bad Company was a pretty big hit when it was released about a year ago, for the first time the game put players in the role of actual characters rather than the no name generic ones of the previous battlefield games. The game also allowed for destructible environments, and energetic multiplayer. Bad Company 2 follows this formula and stays close to it, the game appears to be much sleeker in presentatioin, and seems to add more gameplay in a variety of forms. One of the major aspects in the orignal bad company was the vehicles and the new title looks to do more with them. Click to view gallery 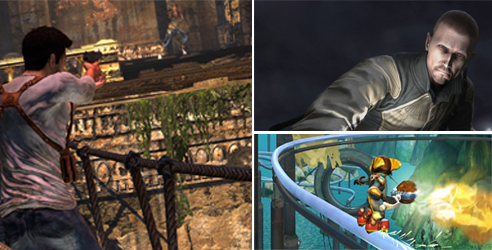